What would you think if the following conversation occurred between me and you...?

You:  Hey, Cory.  How's it going?
Me: Pretty good.  I'm a little tired. I was doing yard work all day yesterday.
You: Yeah, that's rough.  Yard work sucks.
Me: Yeah. Oh, but here's something interesting.  I was mowing the lawn - when all of a sudden - a puppy wandered into my yard. It was brown.  I killed it.
You: WHAT!? WHY!? WHY WOULD YOU DO THAT!?
Me: Well, I didn't know what kind it was.  I was scared it might bite me so I chopped off its head with a shovel.

Well you'd be surprised at the number of phone calls I get along those same lines...but referring to a snake.

People refuse to realize that 99% of snakes that you encounter in your own yard - especially in Rock Hill - are COMPLETELY HARMLESS.  I repeat, COMPLETELY HARMLESS.  You run a much higher risk of getting bitten by that puppy whose head got chopped off earlier than by any snake you'll ever see.

Snakes have tiny brains.  They can't reason beyond, "Can I eat that?  Nope...too big.  Better get out of here".  Snakes are not territorial.

According to http://www.informaworld.com/smpp/content~content=a794143282~db=all and http://www.cdc.gov/niosh/topics/snakes/ there were an average of 5 deaths due to snake bite, in the US, between 1979 and 2004.  Statistically, you're much more likely to die from a dog attack than from a venomous snake bite.  Why aren't we more fearful of dogs?

I'd guess that most any of you would react this way in the following situation.

You're in the park walking.  You see a guy or a girl walking a dog.  Dog comes up to you.  You're most likely either going to ask if the dog is friendly and then reach down to pet it...trusting the owner (a complete stranger to you) completely OR - even worse - just reach down and pet the dog without asking.  ARE YOU CRAZY?  What if it bites you?

What if it bites you?  Dogs bite out of aggression...snakes don't.  Dogs will chase you for no other reason than to bite you.  Snakes won't.  Dogs wander into your yard from somewhere else.  That's called trespassing.  Snakes were already living there.

Now on to the education portion of the program.

Of those 7, you will only encounter 1 in Rock Hill (with the rare anomaly always an option - foreign capture and release, etc)...the Copperhead.  Of the 41 snakes...at my best count...about 10 are "common" in this area (Rock Hill)...that includes the 1 venomous from before.

Here is a picture of a Copperhead.  Easy to identify.  The babies look like the adults (except the babies have very distinguishable BRIGHT YELLOW OR GREEN TAIL TIPS) and, contrary to what everyone believes, the mama snake is nowhere around.  Snakes are pretty bad parents. 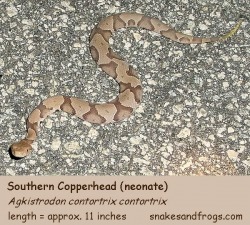 Without fail, these snakes look like the one in the picture.  Copperheads are copper in color, often with darker brown bands on the body and they have unmistakable, orange eyes.

If you see a black snake...it's not venomous...except in the rare case of melanism.  Copperheads don't come in black.

If you have a snake or snakes in your yard...and I'm not at work...call me and I'll happily come and remove it from your property.  Call me and I'll identify it.  If it's harmless...you can go inside for 5 minutes and I bet it won't be there when you get back.  But PLEASE don't call me and ask me to identify a snake that you just cut in half.  At that point, I don't care to help you.  It would be the same as me calling any of you and asking you to identify the 4 pound, brown and white puppy whose head I just cut off with a shovel...because I thought it was going to bite me.